Indonesian people are still unwilling to use public transportation 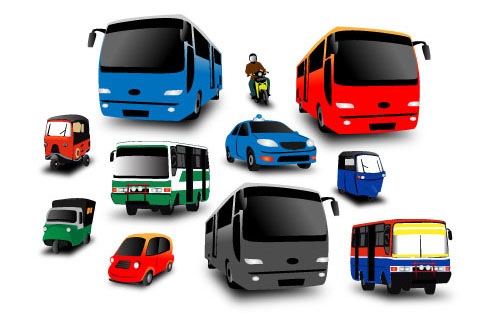 Mobility is one of the most fundamental and important characteristics of human activities as it satisfies the basic need of going from one location to the other. To facilitate mobility, transportation exists to fulfill these needs. Without transportation, we would struggle to get from place to place with the ease we do now. Millions of people depend on transport to go to work, home and to go about their daily business.

In Indonesia, what vehicles are often used? How often do they use the vehicle?

Q: What vehicles have you ridden? (MA)

Transportation modes are essential components of transport systems since they are how mobility is supported. Modes can be grouped into three broad categories based on the medium they exploit: land, water, and air.

In Indonesia, about 88.2 percent riding motorcycle. If you live in big cities in Indonesia, you would see motorcycles in every corner of the roads. The Central Statistics Agency (BPS) released the latest data related to the development of the number of motorcycle units until 2018 reached 120,101,047 units.

While 76.8 percent riding bicycles. In Jakarta, the popularity of bicycles is now increasing again. DKI Jakarta Transportation Agency noted, in 2019, the number of bicycle users increased by 580 percent. Last, 54.2 percent riding cars. In 2018, passenger cars were as many as 16,440,987 units. The data recorded an increase in the number of passenger cars at least as much as 1 million units per year.

Q: How often do you use the vehicle? (MA)

The majority of 79.4 percent answered that they use the vehicle, both private and public vehicles, almost every day. It means that the world we live in today would not be possible without the use of transportation. Mobility, travel and economic activity depend on it.

Q: Where are you going with the vehicle? (MA)

Q: What kind of traffic situation do you think should be improved? (MA)

49.8 percent answered the traffic jams in Indonesia, especially Jakarta, should be improved. The main problem of driving in Jakarta is traffic jams. Based on the 2019 Traffic Index, Jakarta ranks 10th with a congestion level of 53 percent. A large number of private vehicles in Jakarta, as well as the lack of willingness of citizens to switch to public transportation, has made the problem of traffic never resolve.

A large number of vehicles in Jakarta makes 47.4 percent want the government to widen the road. Whereas road widening will not be effective if the number of private vehicles continues to increase. So that it only adds to the congestion problem. Last, 45 percent want pedestrian paths should be improved by the government. The Provincial Government of DKI Jakarta is committed to bringing comfort and safety for all pedestrians in Jakarta. One of them is the development and revitalization of the pedestrian path. The 47-kilometer sidewalk will be revitalized with an optimal budget of up to Rp 1.1 trillion and targeted for completion this year, 2020.

About 52 percent want to use MRT, while 45.4 percent don’t know whether to use MRT or not.

For the information, Jakarta MRT, short for Moda Raya Integrated Jakarta, is a rapid transit transportation system using electric rail trains in Jakarta. The construction process began in October 2014 and was formalized in March 2019. Based on the latest PT MRT Jakarta data, the number of MRT transportation mode users was 2,663,741 passengers during October 2019. On average, it was around 88,791 passengers per day.

Currently, there are still many Indonesians who choose to use private vehicles rather than public vehicles. The surveys shows, the top three ranking vehicles used daily are private vehicles such as motorcycle, bicycles, and cars. So, don’t be surprised if then Jakarta continues to face congestion problems. If you want to do motorbikes or a car business, it’s best to rethink. It would be better to campaign for the use of public vehicles or contribute ideas to the government that can reduce traffic.