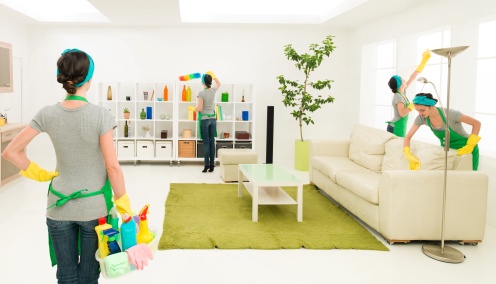 Indonesia, especially its big cities, might be called one of the dirtiest places in the world. However, do you know if Indonesians are diligent enough to clean the house?

Let’s look at the facts based on a survey conducted by Licorice!

Based on the survey, it turns out there is 96 percent of Indonesians who like to clean the house. 56.6 percent of them said they really liked cleaning activities.

There is one funny myth that circulates and is believed by Indonesians about cleaning. According to ancient Indonesians, if a woman does not sweep the floor clean, one day, she will get a partner who has a lot of body hair.

Well, we know that sometimes, a man with a lot of body hair or face hair can be very hot. Let’s say, Jake Gyllenhaal, Chris Hemsworth, or even Kit Harington! Nothing wrong with having a lot of body hair, but that what Indonesian people believe.

Whether because of believing in myth or not, but Indonesians are usually careful when sweeping the floor of a house. Sweeping is an activity that is generally done every day at home.

If seen from the survey, 50.6 percent of respondents claimed to do cleaning every day. Overall, at least Indonesians will clean once a week.

When sweeping the floor, Indonesians are also prohibited from throwing trash in front of the door because they believe that throwing garbage to the door can make someone hard to find a match! You will be single forever. That’s sad, right?

If Japan has a habit to clean up the whole house at the end of the year, Indonesians do not have a special day to clean large-scale houses. But, usually, Indonesians will clean their homes before Eid.

In addition, sweeping at night is also believed to disturb ‘the spirit’. ‘The Spirit’ that upset about this activity, can bring bad things to humans.

Although this myth is quite popular, the real reason is that at night, people’s vision ability will decrease. Therefore, cleaning activities cannot be carried out optimally.

What cleaning tools are used by Indonesian people?

If seen from the survey, there are still 43.2 percent of respondents who do not have electronic cleaning equipment in their homes. If there is, usually, electronic equipment that is owned is a vacuum cleaner.

Before buying cleaning tools, several things were considered by the people of Indonesia. They tend to prioritize the function and quality of cleaning tools to be purchased.

According to the survey, other people’s brands and reviews are not very important in buying cleaning equipment. Do not forget; the price is also quite important for Indonesians.

In conclusion, Indonesians are relatively diligent in cleaning their homes. In fact, since childhood, Indonesians have been inculcated with the thought ‘cleanliness is part of faith in God’.

Because of its importance, there are many myths about cleaning in Indonesia. These myths make Indonesian people more diligent in cleaning, especially sweeping the floor every day.