Safe is the key to feel joy and comfort for everything. When we feel it, life could be easier. One of the most important things about safe nowadays is about internet security.

Since civilization changing into the digital era, every single thing we do will use the internet and control by the smartphone.

But how exactly Indonesians awareness of internet security? How they protect some important data especially on their smartphone? do they ever been hacked? or do they need an extra security apps?

Q: In your opinion, how does your understanding about internet security? (MA) 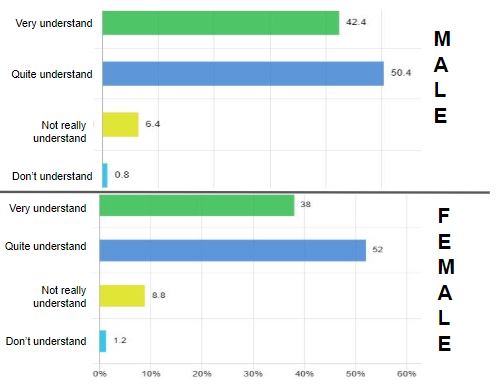 Based on the survey, Indonesians have a good awareness of internet security, precisely 90% of respondents both male and female from various ages. Only below 9% of respondents both male and female even shown their lack of awareness on internet security. It means Indonesians are very concerned about the thing that makes them safe and they very understand about it.

Because of the good awareness, the survey showed Indonesians have less case of internet piracy account. Look at the charts below:

Q:  Is one/more of your registered accounts ever been hacked? (MA)

Passcode and Fingerprint are The Key

Q: Do you use password/fingerprint on your smartphone? (MA)

Based on the survey above, males and females have the same score to define the passcode and fingerprints to help them secure on smartphone. It is clear that these two keys give more protection than not at all. But somehow, according to the charts, both males and females do not use it.

Usually, there are two reasons why they do not do it, first, it makes not feel comfort because difficult to unlock, second, worry to forget what the password is. So the solution is, Indonesian need an extra security application, with the simplest feature and easy code. Look at chart below:

Q: Do you use application security on your smartphone? (MA)

Based on the survey above, about more than 60% of both respondents use application security on their smartphones. It clear that application is really important either for male and female. Besides making your phone feel safer, adding extra applications has some advantages. For example, protect your account from any fraud. According to the same survey, sometimes respondents get some frauds, usually comes from email and website. Then, the next question is, what are the do when facing the frauds?

Q: What do you usually do when you get phishing email (fraudulent emails)? (MA)

It can not be denied that phishing comes from many sources. For example, phishing emails which contain of fraud business message which try to get your bank account with moving lot of money to you. To avoid being a victim of phishing, never respond to any message requests your personal information, no matter how official the message looks.

From the survey, we can conclude that Indonesians have a strong concern about internet security. They start with protect their smartphone or any digital account with some passwords or finger code. After that, if they think more applications so make it safer, they will do it. Because based on the survey above 50% of respondents male and females ever face a phishing on the internet.

A Recommendation After School Activities, A Survey on Indonesian Extracurricular Preferences For Student

Discovering Indonesian Female’s Trend On Social Media, What Apps They Like The Most?