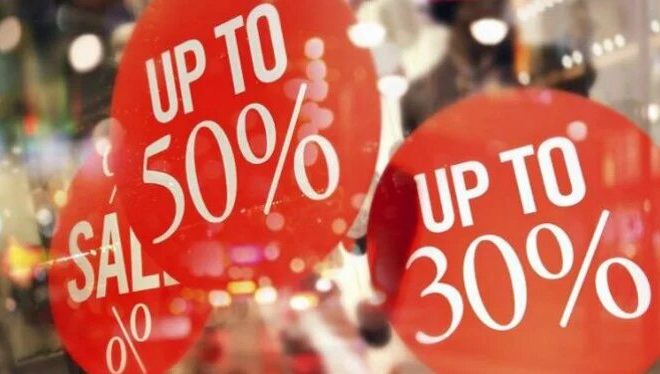 Shopping is a part of a lifestyle that can’t be separated from our everyday life. From primary to tertiary needs, nowadays, we can find the goods we need not only in offline stores but also online.

Some people shop every month, every week, or even every day! However, when is the best time to buy? Sale season is one of the best times to check your shopping list.

Let’s see the survey conducted by Licorice below to see Indonesians’ tendency and preference for shopping, especially during the sale seasons.

Respondents: Indonesian, 250 from Jabodetabek and 250 from outside Jabodetabek, aged between 10-59 years old 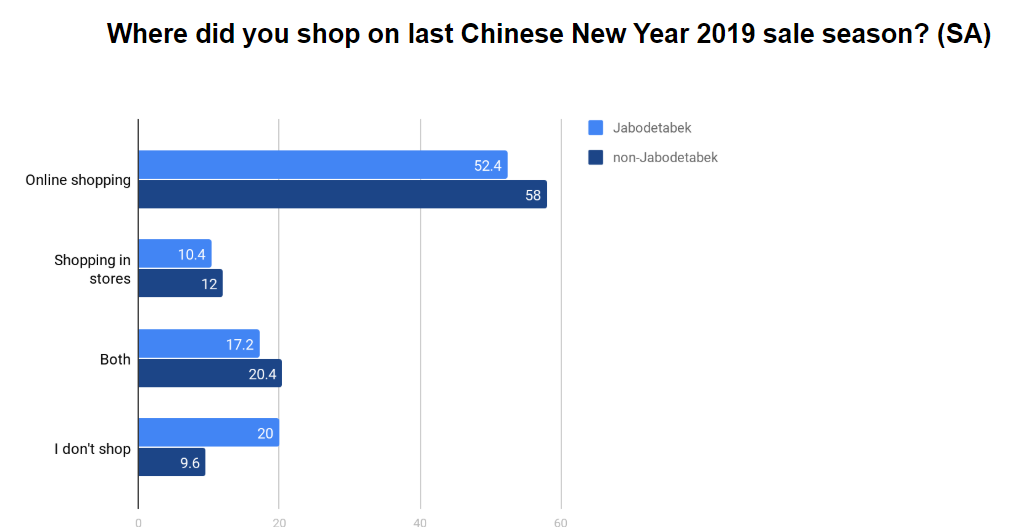 Usually, Indonesians tend to prefer to follow discounts at online stores. In 2018, Indonesia had indeed become the fastest growing e-commerce country in the world. The number of internet users in Indonesia, which is more than 100 million users, is the driving force for e-commerce growth.

The average money spent by Indonesian people on online shopping sites can even reach Rp. 3.19 million or USD 228 per person. Besides Indonesia, another country that has the fastest growing e-commerce in Mexico. 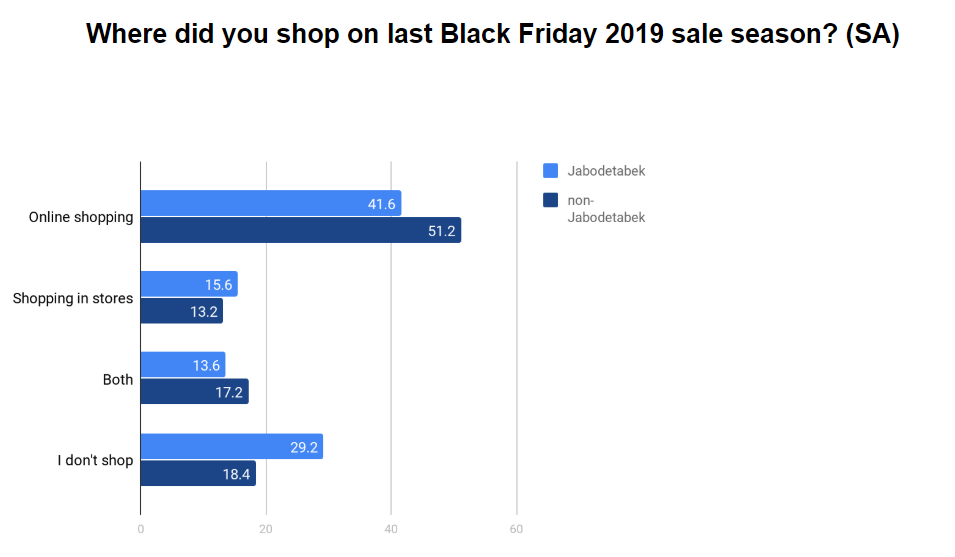 Interestingly, when compared to other discount seasons, Indonesians are less likely to take advantage of Black Friday discounts. If seen from the survey, there are 29.2 percent of Jabodetabek people and 18.4 percent of people outside Jabodetabek who don’t shop on Black Friday.

Indonesia is not a country that celebrates Thanksgiving (although there may also be a number of people who celebrate Thanksgiving, the number is very small). In Indonesia, Black Friday is better known as National Online Shopping Day (Harbolnas).

As the name implies, on that day, online shops will hold massive discounts. While offline stores usually do not participate in holding discounts on Black Friday. Indonesians tend to prefer to take advantage of discounts during religious holidays. For example, at Christmas, Chinese New Year, or Eid. 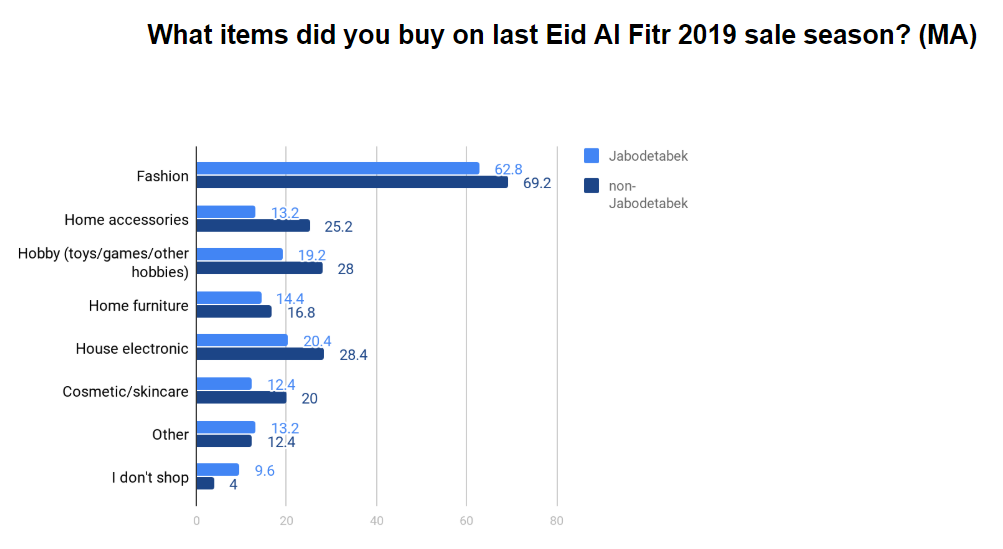 If seen from the survey, the most purchased items at a discount are fashion items. When discounts on holidays, for example, Eid al-Fitr, more people buy new clothes.

During holidays, Indonesians have a habit of visiting relatives. When visiting, Indonesians always try to wear their best clothes. Therefore, approaching the feast, usually, Indonesians will try to buy new clothes.

In addition, for Indonesians, wearing new clothes on the day can be interpreted as starting a new life. With this philosophy, do not be surprised if fashion items become the best-selling item on a massive discount day.

How do Indonesians shop? 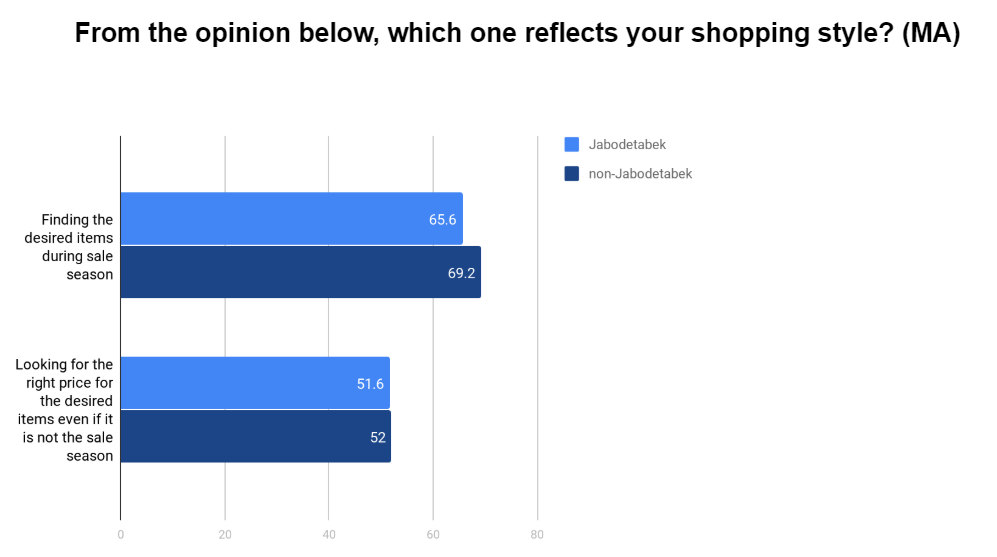 For some things that are expensive and tertiary in nature, such as hobby objects, games, usually, Indonesians will be patient and wait for the discount day to arrive. So, in addition to buying new clothes, Indonesians also take advantage of massive discount days to buy their dream objects.

However, several respondents will buy the item they want even though it is not being discounted. In addition to waiting for a discount, usually, Indonesians also like to save or use installments to buy things of their dreams.

Overall, the majority of Indonesians like to take advantage of discounts. But, the number of buyers will be more during discounts on holidays, such as Christmas, Eid, or Chinese New Year.

Items that are usually purchased at a discount are fashion items. Indonesians will usually take advantage of discounts at online stores.