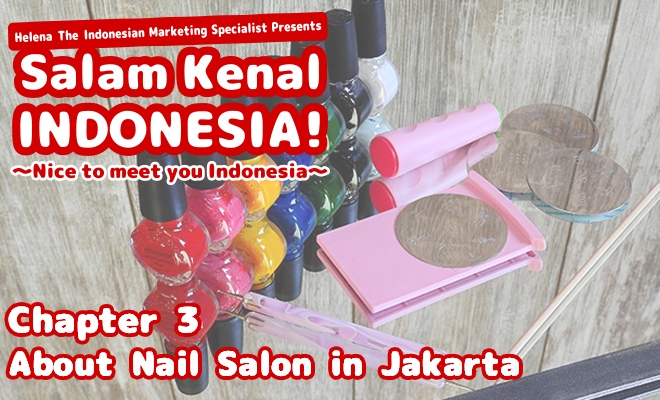 In this volume, I will introduce about nail care in Indonesia and Indonesia’s nail salon with Indonesian writer: Rezky.

Doing a nail care, going to nail salon is one of activity that becoming some kind of habit for women in this world. In Japan, it is normal for women to go to nail salon and do their nail care regularly. But do you know that woman in Indonesia also do nail care? 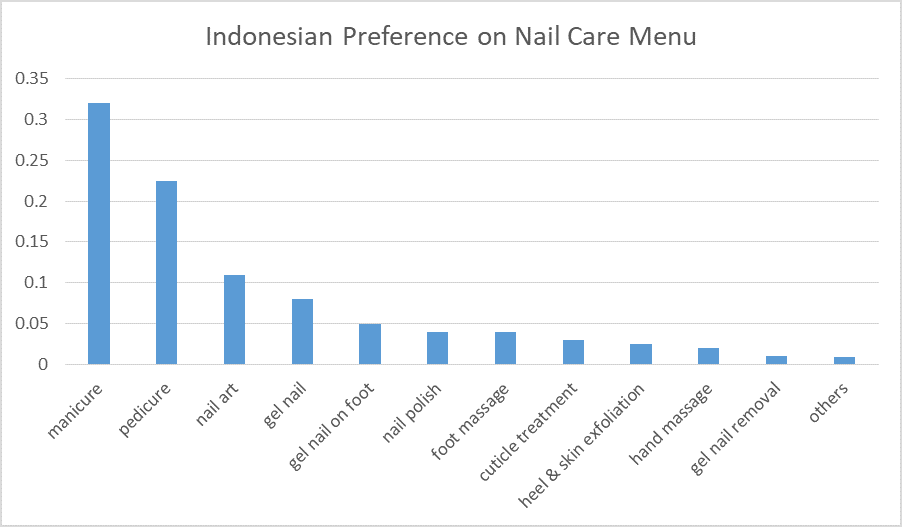 Based on Licorice Research in 2017

The most popular nail care option in Indonesia is manicure and pedicure (for foot nail). But actually, manicure is more popular than pedicure.

I found out about nail art in 2004 when I was still in 6th grade in primary school. It was from a Japanese Manga called “GALS!” and it was the first time I heard about nail art. At that time I had not heard about nail art at all from anyone or any other source around. Then at 2009 I went to a nail salon with my mom for the first time, and that time I realized about the existence of nail art once again. Before that I didn’t really go to nail salon, but I knew that people can get a haircut and getting a manicure and pedicure at the same time at hair salon.

But since hair salon only offer some basic manicure service, some people like Rezky’s friend, Gaby, prefer to go to a proper nail salon. She said that, the manicure quality is way better if you go to a professional nail salon. Gaby usually goes to a nail salon called “Her Glam Nail Boutique”.

Geby got interested in nail for the first time when she was still a college student. That time she did her cuticle care and some simple nail art by herself. She started to go to nail salon since she became a working member of society.

“Her Glam Nail Boutique” is located on Pondok Indah Mall, a highly popular shopping mall which located in South Jakarta region. In that nail salon you can get nail art, nail gel and several other options on their menu.

The Nail Salon price is cheaper in Indonesia than in Japan. For example, at some Nail Salon on Chiyoda-ku, Tokyo, you can get a one color gel for about 7000 yen, but it only cost about 3000 yen in Jakarta, Indonesia.

Geby said that she goes to nail salon as a form of refreshment, and she usually get treatment such as nail care, nail polish, nail art, and also gel nail. Her favorite one is gel nail and gel nail removal, even though it is more expensive than nail art and nail polish. Gel nail is more long lasting and don’t get scratched easily so even though it is more expensive, she’d prefer to get a gel nail.

So what do you think? For those of you who want to know more about Indonesia, please leave your comment below!

On the next volume, we will talk about the latest mono rail of Jakarta airport, Sukarno Hatta!