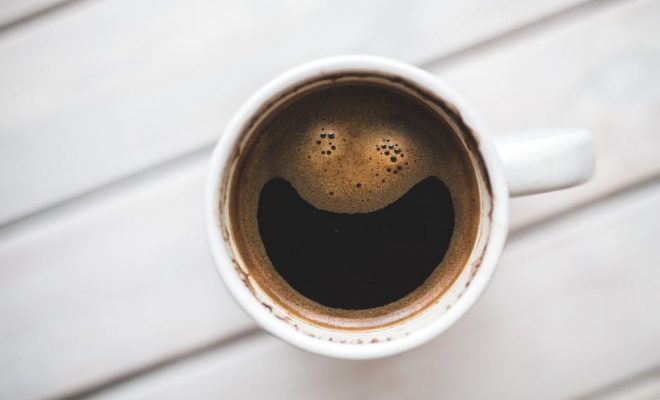 Indonesia might be the home of coffee, with many variants from many places. Yet, do most of them enjoy their original brewed local coffee?

Let’s find out about Indonesian preferences on coffee!

This result is from a survey done by Licorice.

Q. What kind of coffee do you usually drink? (SA)

Based on a survey by Licorice, about 76 percent of Indonesian like drinking coffee. But, when asked about their favorite kind of coffee, about 55.8 percent of them favorited Instant coffee! Only one-third of Indonesian coffee sippers prefer regular brewed coffee to drink.

Indonesian crowded road and fast-paced living in big cities might be the main factor why Indonesian love instant coffee. Instant coffees provide a fast and convenient way to enjoy a cup of coffee. In Jakarta, you can easily find instant coffee brewers everywhere from the small coffee shops until the street-biking coffee brewers. The latter is even well known as Starling, which abbreviation is Starbucks Keliling, implying that they sell coffee just like Starbucks does, but a lot cheaper and using a bike to sell it from place to place.

After work, you could simply call street brewer to make you a cup of instant coffee with various tastes at ultimately cheap price. While you arrived home, you could even brew your instant coffee sachet stocks with a lot of taste variations. As simple as that!

How is instant coffee sales in Indonesia?

Indonesia is increasingly dominating the global retail coffee market (coffee in packaging) with an average sales growth of 19.6% per year for the past half-decade. Meanwhile, the second and third positions respectively followed by India (15.1%) and Vietnam (14.9%).

There are at least three top coffee brands manufacturers that you could easily found almost in every merchant. First, PT Santos Jaya Abadi or Kapal Api Group simply the king of Indonesian instant coffee, which products are varied from instant black coffee until a lot of various tastes of coffees. Its market expanded from oldies to younglings.

Q. How do you taste your coffee? (SA)

Indonesia is known because of its richness in region-based coffee with each distinctive taste and smell. They are the infamous Toraja Coffee, Gayo Coffee, Papua, Flores, or Aceh, for instance. Uniquely, the survey said that Indonesia’s most preferable coffees are Cappuccino and Cafe latte, seizing more than 50% of respondents from both coffee.

Right now, there are already a lot of instant coffee brands in Indonesia. Indonesian favoritism on Cappucino and Cafe Latte impacted their favoritism instant coffee as well. That explains why most vendors or markets keep increasing their stock on cappuccinos or cafe latte taste instant coffee.

Though not many, Indonesians also liked black coffee with or without adding milk. You can find this kind of coffee almost in every city and some cities even have their specialties and tastes, such as Gayo from Aceh, Sidikalang Coffee from North Sumatra, Temanggung coffee from Central Java, Toraja coffee from South of Sulawesi, Papuan coffee and many more.

Q. Where do you usually drink coffee? (MA)

They drink their coffee almost daily. Yet, most Indonesian prefer enjoying coffee at home, as shown by 54.3% green graph above. They also do not have a specific time to drink coffee. The three most chosen coffee times are after waking up, break time, or relaxing times. So it can be concluded that Indonesian love enjoys their cappuccino or latte instant coffee in their home.

But, what’s the best coffee to be consumed at home? take a look at the survey result below:

Q. What is the most important thing for a coffee to be consumed at home? (SA) 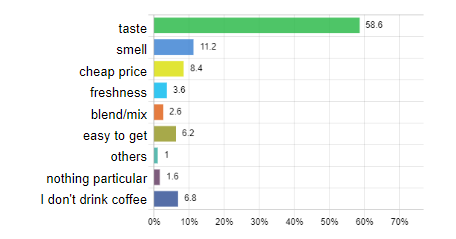 Though most Indonesian prefer to sip their instant coffee at home, about 20% of Indonesian coffee lovers still regularly go to the cafe. Their top priority for a cafe is the coffee taste itself as shown by the blue graph below. They would like to go to a cafe if the cafe is known for its delicious coffee.

Q. What makes you visit a cafe?

However, some Indonesians also willing to pay a visit if the cafe is famous. The well-known cafe is the second factor that determines Indonesians’ interest in visiting certain cafes. This is more likely because Indonesians are easily hyped by well-marketed places or well known new places.

If the cafe is cheap, it will attract more visitors as well. They also love hanging out at a cheap place often, of course without sacrificing its coffee taste. As well as cheap, Indonesians see comforts as a valuable selling point from a cafe. A comfortable cafe will make Indonesian cafe visitors come back again and hang in there longer, not only to enjoy some coffee, but also to do their works, meetings, or simply to chat around with friends.

Well, Indonesian are clearly addicted to instant coffee. It’s convenient, fast, and cheap. Three keys that must be included in an instant coffee brand are its great taste, good smells, and cheap price. However, Cafe still has its special place for one-fifth of Indonesians. If you want to develop a cafe in Indonesia, make sure you provide delicious coffee, make your cafe well-known to attract visitors, and put reasonable prices for the coffee.

Indonesian Very Love With Manga and Anime, Why?