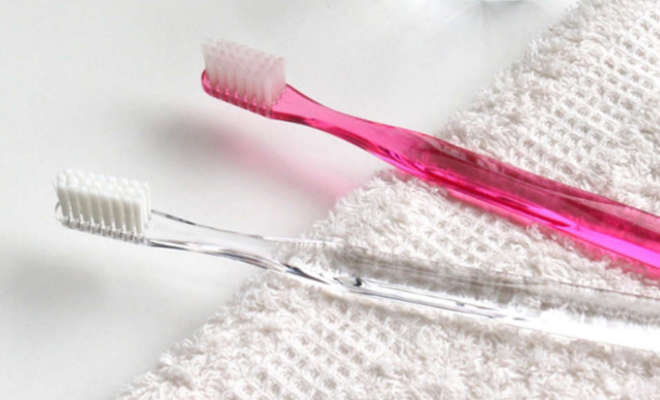 When and how do you [brush your teeth]?

Maybe there are a lot of people answer that “I was brushing my teeth with the habit I got from my childhood!”.

We would like to introduce about Tooth Brushing Habits in Vietnam, based on the data of [Survey relevant to Oral Care (※)]

Q. Please check all the timing when you brush your teeth. ( MA )

Since the response [Without brushing teeth] is only 1%, we can understand that Vietnamese has tooth brushing habit more than once a day.

And then, everyone in Japan.
Do you notice something from this survey result?
In Vietnam, about 10% people brush their teeth [After eating], it’s minority!

Actually, in Vietnam, as well as in other countries, people don’t often brush their teeth after having meals, but [Before going to bed] or [After getting up] is more popular.

The timing of tooth brushing in Japan is quite rare compared with other countries!

Regarding the timing of tooth brushing, although science has advanced, but it seems there is no established theory yet.
When you sleep, since the secretion will be less released, and the tooth decay may increase.
That’s why people want to brush their teeth before going to bed.

Q.How long is your average time to brush your teeth?（SA）

Since the survey items of each research are different, we cannot compare in details. But Vietnam seems have a slightly shorter time on brushing than Japan.

But after all, [Quality] is the most important thing than brushing timing or how many times!
So next time, we asked about the tools that people use to brush their teeth.

Q.Please tell about the tools you use to care for your teeth.（MA）

About the usage percentage of mouthwash, it’s low in general, 8% of male and 16% of female, the result is the same as in Vietnam.
It seems there is no big difference between Japan and Vietnam about the survey result of tooth brushing tools.

That tooth brushing tool is important for preventive dentistry!

We investigated about the differences between tooth brushing habits between Vietnam and Japan, and we know that [Brush after having meals] habit of Japan is quite strange to Vietnam and other countries.

And about the brushing tools, both Vietnam and Japan has the same with [Toothbrush] response.

Based on the research was conducted by Lion Co., Ltd. in 2014, the usage percentage of [Dental floss] in America and Sweden where the preventive dentistry has developed, is America (60.2%), Sweden (51.3%), Japan (19%).
Even the usage percentage in Vietnam is low, but we also cannot say it’s high in Japan.

Oral care in developed countries, in addition to brush, people use floss, rinse, and various kind of tools to care for their teeth.
We need to do the best efforts to imitate this habit more and more.

[Teeth] are our life.
As well as body care and health care, we need to pay attention to dental health.

For those who only use toothbrush to care for your dental daily!
After brushing your teeth [Before going to bed], why don’t you start using [Dental floss]?