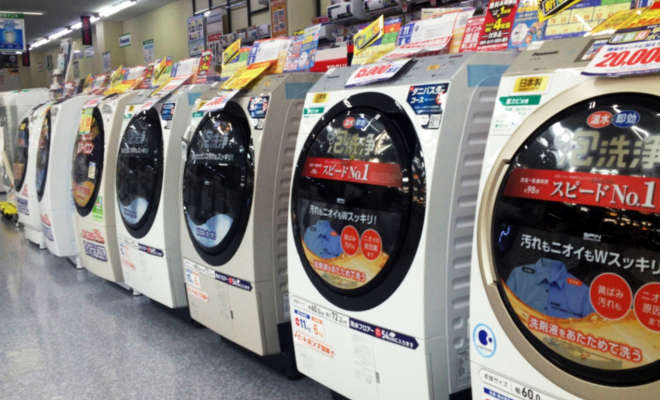 Survey on the situation of home appliances in Vietnam!

There are many home appliances around us such as Refrigerator, Vacuum cleaner, Washing Machine, Dish washer, Microwave, Cooler, etc

[Q.] Please check mark all the appliances you own from the following list.（MA）

When asked about “which all appliances do you own”, the highest response was “refrigerator” at 83% of the total, followed by “TV” at 76% and “rice cooker” at 73%.

According to the Ministry of Internal Affairs and Communications statistics Bureau “Survey on national consumption in Heisei 20 years”, the TOP 3 home appliances with the highest penetration rate as major durable consumer goods in Japan were, “Fridge” 98.1%, “Washing machine” 97.7%, “TV” 96.9%.

Indeed, these are still the three sacred treasures.

Single people in Vietnam live in affordable share houses or shared rooms rather than living alone in apartments and condominiums, there is use of a common washing machine, so the possession rate of washing machine tends to be low in Vietnam.

Moreover, with the economic growth of Vietnam, the spread of the Internet has also progressed and hence the number of owners of personal computers is also on the rise.

This kind of background is influencing and the popularity of “PC” might dominate over “washing machine”.

[Q.] Please tell us the name of the manufacturer of the appliances you use. (MA)

As there are no domestic home appliances manufacturer in Vietnam, manufacturers from South Korea, China and Japan seem to occupy most of the market.

After this, we asked people about their favorite home appliance manufacturer!

[Q.] Please tell us your favorite manufacturer of home appliances.（SA）

The men’s TOP 3 had the same rank as the home appliances they actually have, but women seem to be more interested in Japanese makers as women had ranked Japanese makers from 2nd to 4th place.

In the Vietnamese home appliance market, to start with, Korean manufacturers such as Samsung only boast an overwhelming share in the market.

Although Japanese appliances have a reputation of being of high quality, the prices are slightly higher than those of other countries.

It seems that the current situation is that “Home appliances are longed for” by people.

Since home appliances are equivalent to luxury goods in Vietnam, the quality as well as the price seems to be one of the important decisions when considering purchasing home appliances.

[Q.] Not having which home appliance would be problematic for you? Please choose.（SA）

When asked “not having which home appliance would be problematic for you?”, both male and female respondents chose two home appliances, “microwave; oven” and “audio devices”.

But if we compare with the results of the “home appliances (ownership rate)” which we showed to you earlier, the ownership rate is not that high. It is 21% for “microwave; oven” and 34% for “audio devices”

In case of microwave ovens and audio devices, their demand isn’t that much.

On summarizing the situation of Vietnamese home appliances, the following result was obtained.

★ Home appliances whose absence would be problematic : “Microwave ; Oven” and “Audio Devices”

There are many home appliances related to “food”.

As Vietnam has a warm climate throughout the year, “Refrigerator” is a necessary item to store and preserve food.

As “food” is an indispensable element to live, people can’t help depend on its support.

It cannot be said that the home electronics penetration rate in Vietnam is still high, but it is expanding steadily.

In the meantime, what kind of household appliances will be nearly 100% penetration rate in Vietnam and how Japanese appliance manufacturers approach Vietnamese consumer electronics market

Following this, what kind of household appliances will have a penetration rate of nearly 100% in Vietnam and how Japanese appliance manufacturers will approach Vietnamese consumer electronics market.

We are looking forward towards the developments in future.